Assisi to Rome, a bike trip through lesser known Italy

Everybody knows Tuscany of course and for a reason. Wonderful landscape and food, culture and nature. But sometimes one has the need to go off the beaten path. To cycle in places where the majority of people you meet are real locals. Where prices are still affordable and not driven by pounds or dollars and people are still asking travellers where they come from.

I know a place that has it all…

Once upon a time I used to roam the Italian land, not on a bike but on a shiny company car trying to be a good corporate manager. I am happy that those times are over but what I am thankful about is that they gave me the chance to explore all of central and northern Italy. That is how I got to live for one year in Umbria.

Umbria is just one hour by car or train from Rome or Florence: a region in Central Italy defined as the “Green Heart of Italy” for its geographical location and environmental characteristics. You can find everything there: spirituality, art and great landscape.

Apart from some very touristic locations like Assisi, everywhere else is truly authentic.

This spring I decided to come back and explore it by bike. I always like to combine early season training with scouting new routes that later most likely will become official bike holidays in my tour operator portfolio. While planning the trip a good friend of mine from Rome, Ottavio, proposed to me to go all the way to Vatican city.

Great idea! From Assisi to Rome following in the footsteps of Saint Francis. 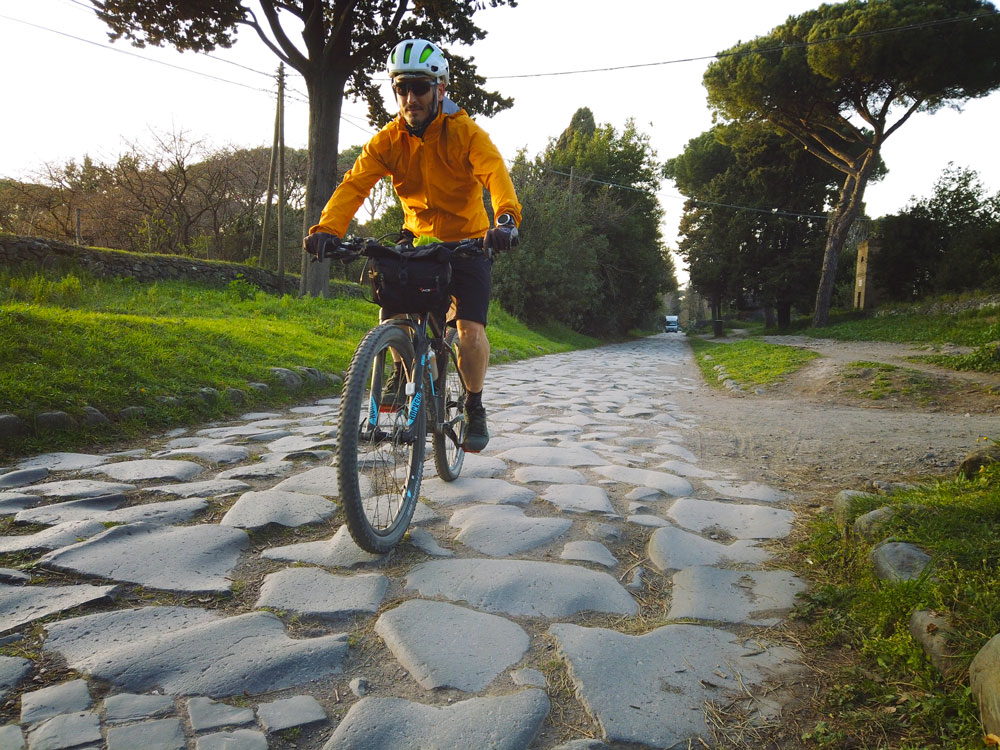 Day 1 – From Assisi to Spoleto

From Firenze I reached Perugia by train and I started to ride. In a few km I got to Basilica di Santa Maria degli Angeli first and Assisi later. Assisi is beautiful, there are many tourists but it is for sure a place to visit. Impressive churches, narrow streets, olive trees, sunny squares full of cafes are among the things that will welcome you. I particularly enjoyed visiting Eremo delle Carceri, a hermitage complex located located in a steep forest gorge upon Monte Subasio where San Francis went to pray and contemplate, as did other hermits. 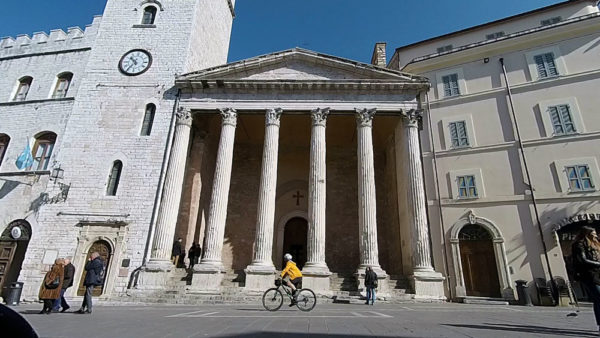 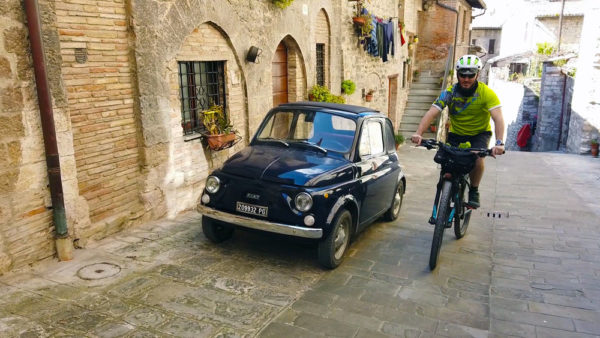 From Assisi starts an official cycling path that goes south all the way to Spoleto. It is very flat so I spiced up the stage a bit leaving the cycling path from time to time to visit some amazing hill top villages. Among them Spello, where I stopped for an olive oil degustation, and Montefalco where I had the best wine and food of the whole trip in a restaurant located in the beautiful main square kissed by the sun (well deserved, the uphill to get to the town is so steep!).

After about 65 km and 800 meters elevation I arrived to Spoleto. After checking the house where I used to live, I went straight for a hearty lunch in one of my favourite trattoria, Osteria del Trivia. 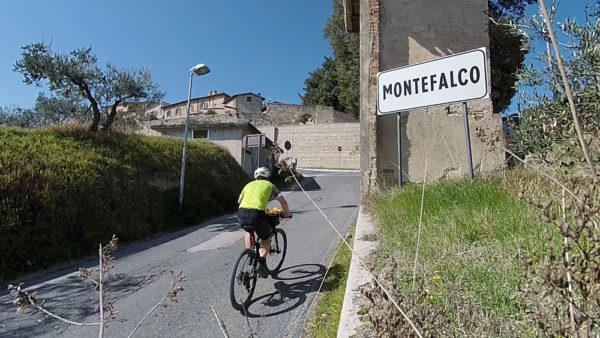 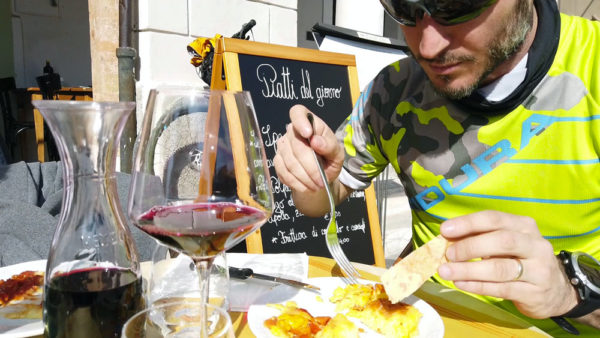 Day 2 – From Spoleto to Marmore

Although Spoleto is not big, there is a lot to see. Not only in the town itself but in the surrounding. Apart from Basilica, the stunning roman bridge Ponte delle Torri, the castle and many other cultural highlights, I recommend to check out Monte Luco, the hill in front of Spoleto. I use to find peace of mind in the secular olive tree orchard up there. 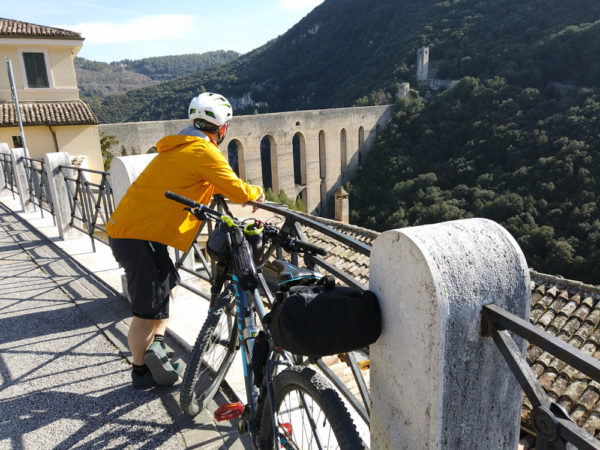 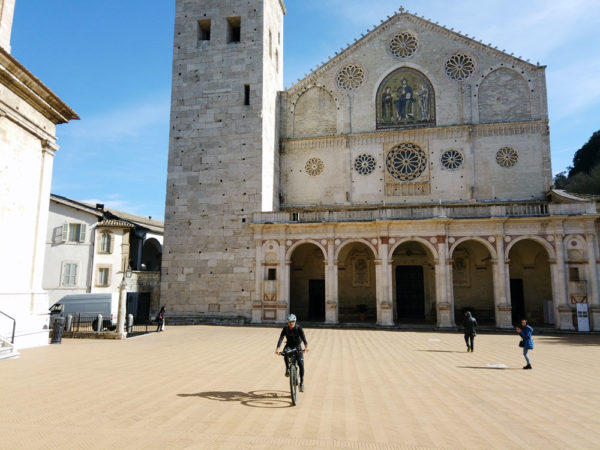 In Spoleto I met my friend Ottavio at the station. He came up here by train from Rome. As I know the place well, together we did a quick tour of the city and then we hit immediately the old railway track that recently became a cycling path and called Old Railway Spoleto Norcia.

We did only the first part of it that connects Spoleto to the amazing Valnerina. The trail is all gravel and it is characterised by tunnels and bridges. It goes smoothly up so you don’t feel the climbing but in the end of the day you put together a decent elevation. Once on the top of the mountain, it goes equally smootlhy down to Valnerina (Note: When I rode it, a tunnel was closed due to reconstruction so we had to partially use the asphalt road (Car traffic was almost inexistent though). 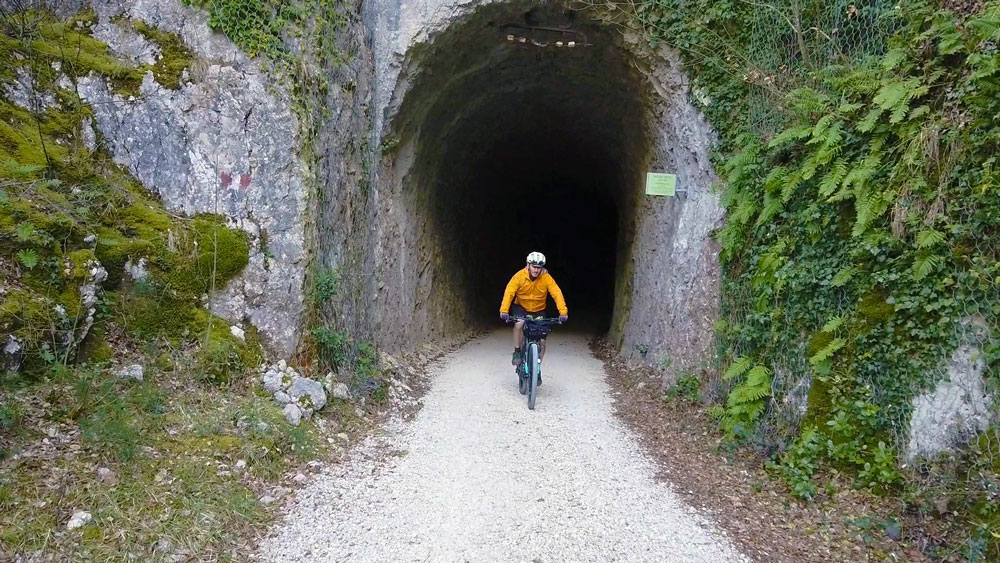 Once in Valnerina we got on the Greenway route that follows the Nera river and takes cyclist through amazing old towns like Ferentillo, famous for rock climbing and mummies!, and Arrone.

After a long and exciting day we got to Marmore waterfalls, a unique site because its fall of 165 meters is the highest in Europe. We spent the night there in a beautiful farm just outside the center.

My curiosity took me to few more villages and places up the hills than necessary so I closed the day with a respectable mileage of 75 km and 1400 mt elevation. 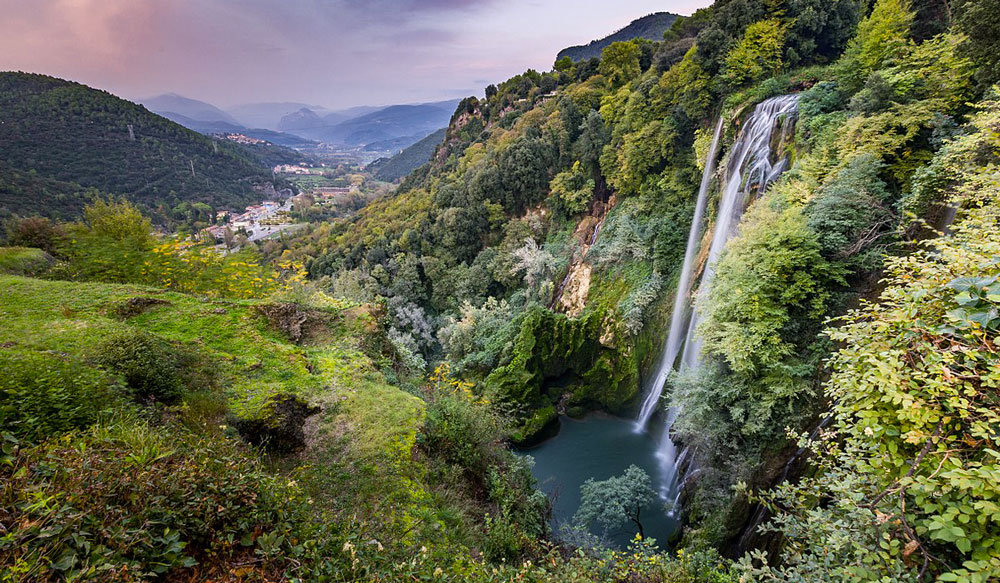 Day 3 – From Marmore to Orte

From Marmore to Terni is a quick ride downhill. Terni doesn’t have much to offer in terms of sightseeing so after visiting the old town we quickly headed for Narni, another city worthy visiting. Among everything I really liked the visit of Narni underground.

From Narni starts another old railway converted into a cycling path that shortly lead us to a very interesting place called Stifone. It used to be an old roman shipyard and what makes it very appealing still nowadays is the color of the water that in this part of the river is emerald. It makes you wanna jump in and I am sure that in summer people enjoy this spot very much. 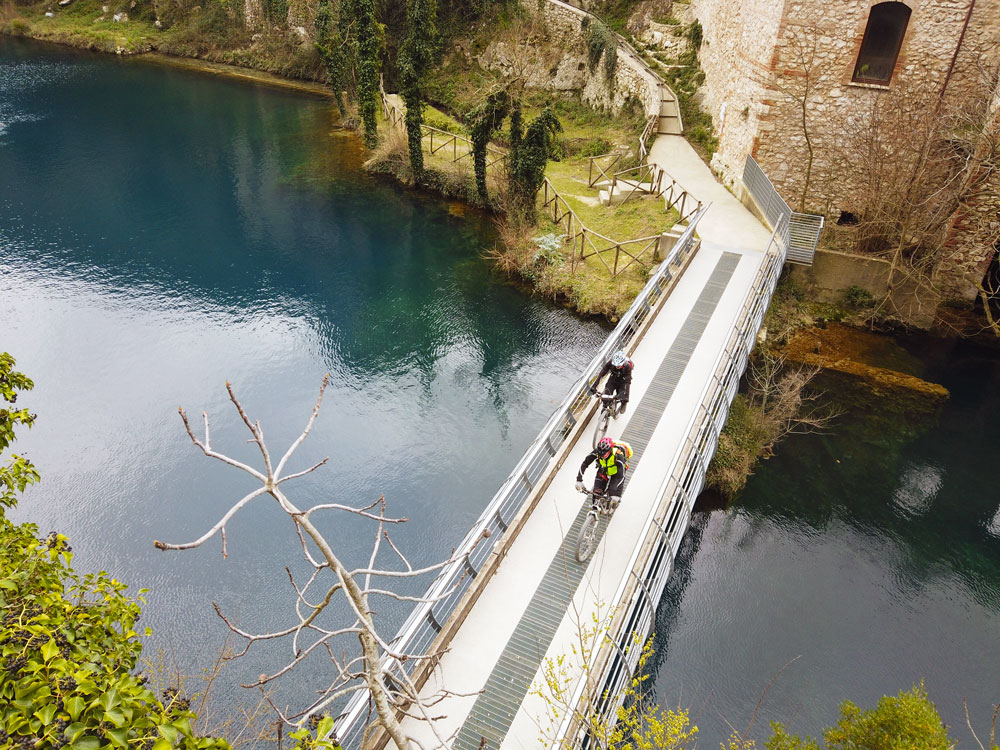 Soon the hills leave place to Tevere river valley, we said good bye to Umbria and we entered Lazio region, where Rome is. Also the old railway finishes and we followed a few minor roads to the city of Orte where we spent the night. Today stage was shorter, about 40 km and 400 meters elevation.

Day 4 – From Orte to Calcata

From Orte we started riding the Ciclovia del Sole which takes you all the way to Rome.

We soon entered an area called Tuscia, Land of the Etruscans. This pre-Roman population has left precious testimony of its past in the necropolises of the area and we are going to see many of them during today stage.

Soon enough we started to ride up and down the hills and we saw the first tufaceous cliffs, a distinctive characteristic in this area. Here the natural environment has not been subject to radical transformations, and today the area contains several nature preserves and protected areas. The historic centres of the small medieval towns are clustered around castles and collegiate churches. 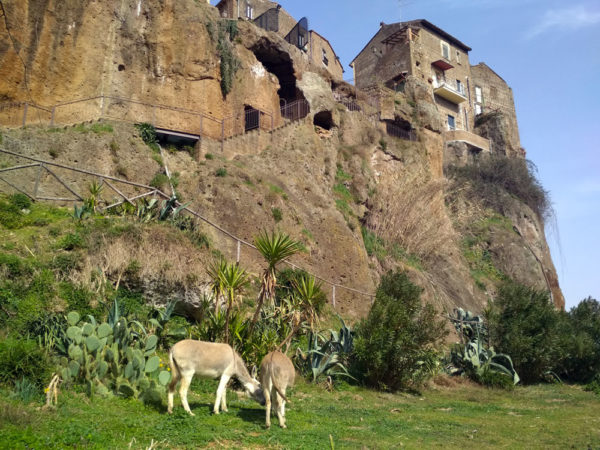 While pedaling on these hills, I had the feeling that in this part of the world the time has stopped to when at the biginning of the second millenium, a large number of pilgrims began crossing through Europe in search of the lost “Celestial Land” following the Francigena Road that led all the way from Canterbury to Rome.

We crossed beautiful towns like Gallese, Corchiano, Civita Castellana and Nepi with a little detour to the Necropoli Tre Ponti. In Corchiano Ottavio took us to his cousin’s wine cellar where we were warmly welcomed and offered a nice wine tasting. As everywhere in Italy, there are very good wines also from this area. 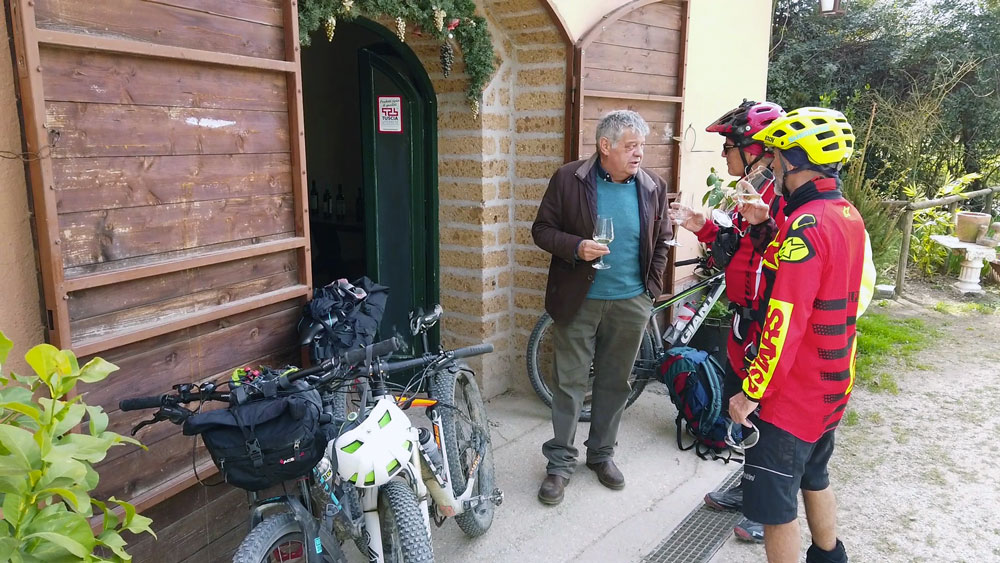 Mountains in this area are small but hill after the other it is easy to build up some elevation and I started to feel the mtb loaded with bikepacking bags so I decided to call the day, after 55 km and 1000 mt elevation, in the charming town of Calcata, a village that stands on a mountain of tufa rock only accessible from a single door that opens on the walls. 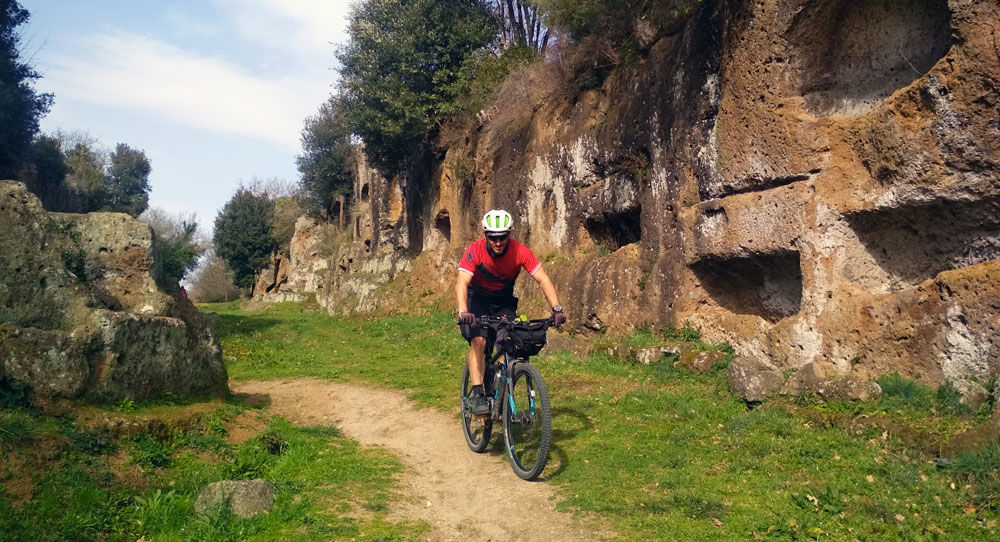 Day 5 – From Calcata to Rome

I woke up very excited about the fact that I was going ride all the way to San Peter Cathedral and I couldn’t wait to have some nice Spaghetti Cacio e Pepe, a classic of Roman cuisine. 50 km circa and 500 mt elevation divided us from our destination. 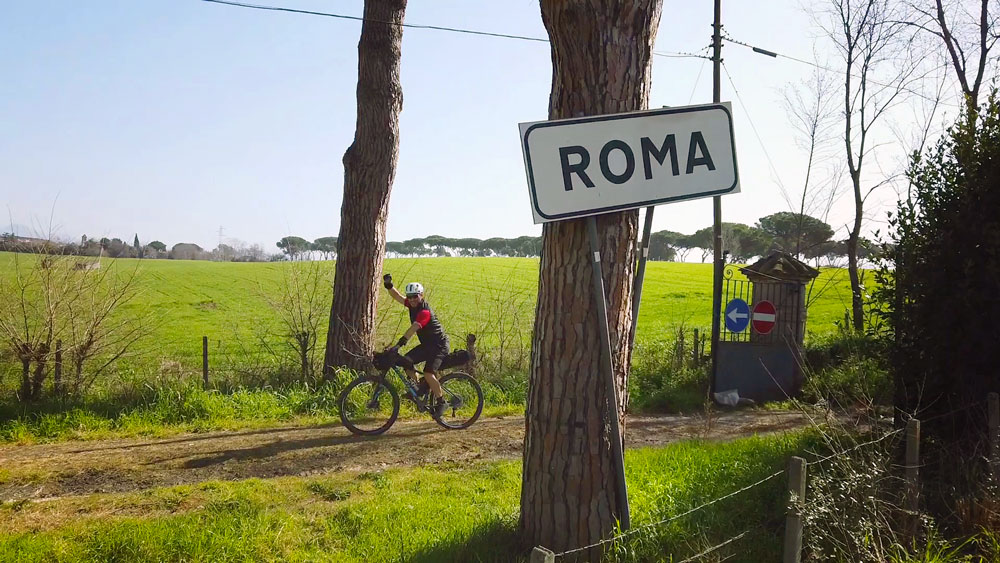 After a few rolling hills we started to see Italian capital city lying huge in front of us. Soon the countryside left space to densely populated neighbourhoods. After a bit of zig zaging we made it to Tiber river cycling path that took us safely all the way to Vatican City. 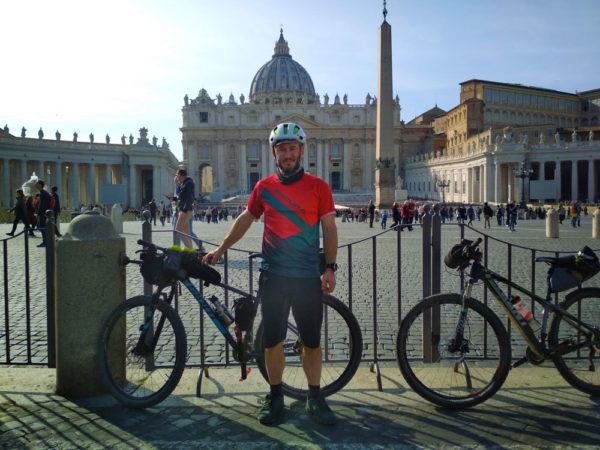 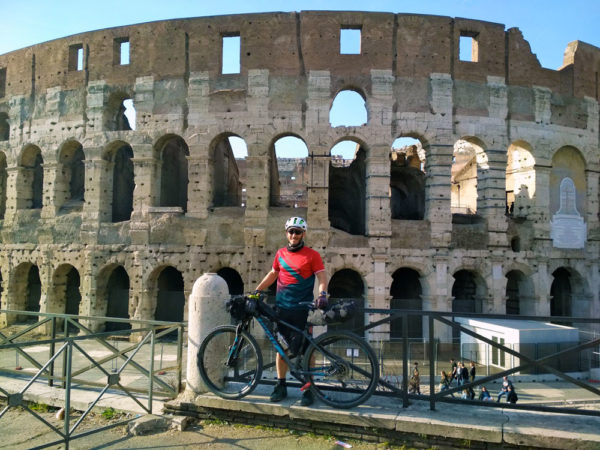 After the usual photos, I gladly accepted Ottavio’s offer to show me around and so we spent the rest of the day hitting all the most famous spots that the capital has to offer and there are so many! Colosseum, Castle S. Angelo, Trastevere, Fori Romani. Ottavio surely knows his turf as he works as a mountain bike guide and instructor, so we moved fast between them through small roads.

After almost 300 km of quality bike packing I found myself thinking once again: What a great thing is the bike, isn’t it?

For this trip I chose a hardtail MTB 29er as I was not sure about the terrain. It was a good choice because there is a lot of gravel and the Greenway Valnerina was quite rough. But my favourite choice now would be a gravel bike so I could ride the asphalt parts faster. For my trips I use bikepacking ultra light bags, I am a big fan of them. 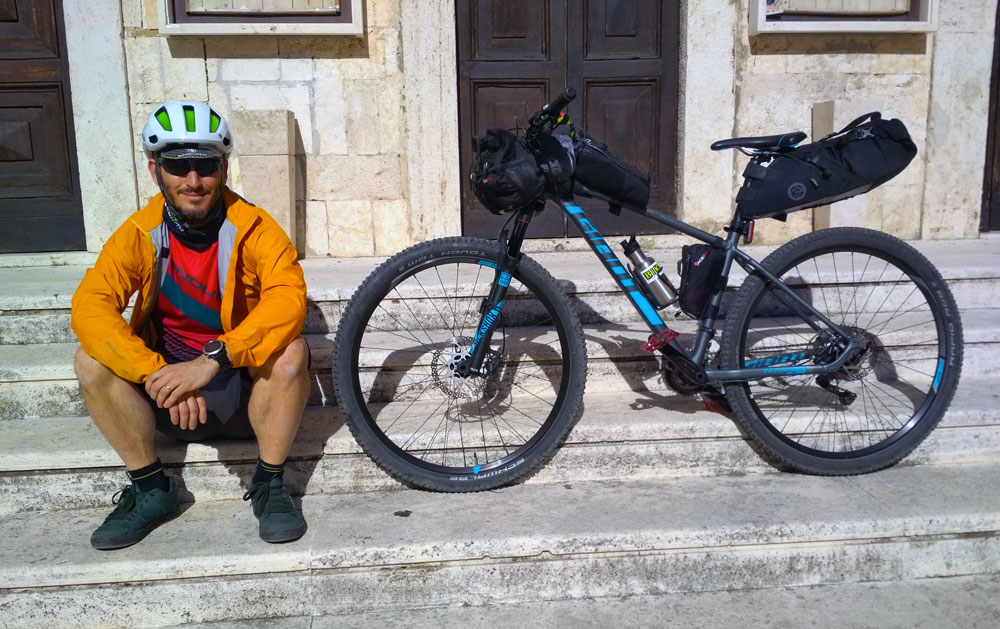 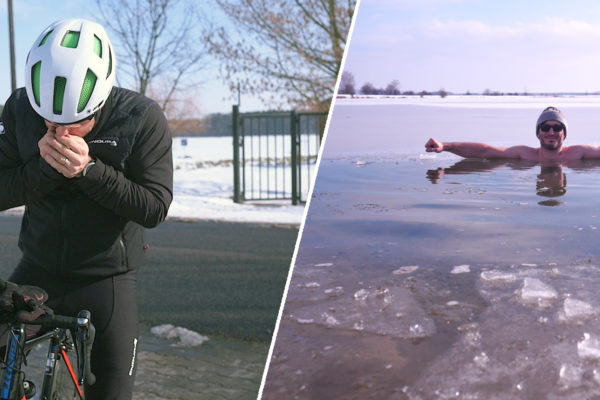 Winter Cycling: Embrace the Cold & Get Stronger with the Wim Hof Method 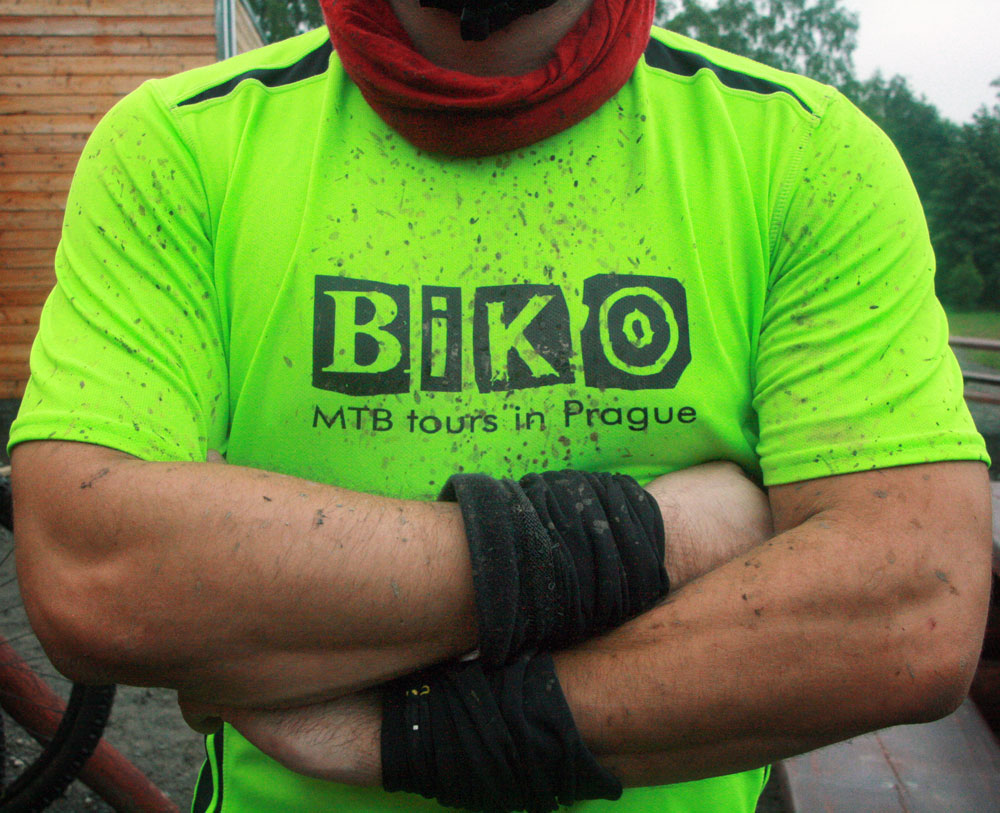 We are an outdoor family company based in Prague. A bunch of enthusiastic locals who know every cm of forest around Prague and not only and we want to share our knowledge with you.
Email
Facebook
Twitter
Google+
YouTube
Vimeo
Instagram
Yelp
Foursquare
Tripadvisor
RSS

BIKO is supported by